We accept all major cards on our secure online shop.

Originally established in Bristol in 1997, they joined the Norcom Technology Group (which was founded in 1986) and moved to Norwich a year later. Meridian Chartware Ltd is a leading software developer of marine navigation systems for personal computers (who also provide consultation and access to complementary products and services, as well as undertaking software development projects of all kinds using their experience in C++, Java, Flash and HTML).

They have developed products under their own brand and for the UK Hydrographic Office (UKHO) in conjunction with the Royal Yachting Association (RYA) and Imray, Laurie, Norie & Wilson Ltd with the goal of making navigation simpler, safer, quicker and more accurate. 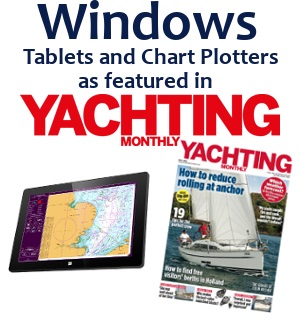 A range of RCDS (Raster Chart Display Software) navigation systems produced by Meridian, offering different features and services, can be used to read the UKHO's official electronic charting system ARCS (Admiralty Raster Chart Systems) for which Meridian are also an agent. Meridian also produces a range of Chart Plotters with the same navigational functions and the same UKHO charts (though not in the ARCS format) which are also compatible with Imray's charts, that are primarily intended for leisure users (though equally appealing to some commercial operations), which differentiate themselves based on very flexible, competitive licences and on price.

Norfolk is a small hub for the marine industry, with Norwich being closely located to Great Yarmouth (the southern centre of the UK offshore oil industry), and easily accessed from other areas of the UK (with London being less than a two hour train journey,) and internationally (with Amsterdam being approximately an hour's flight away).